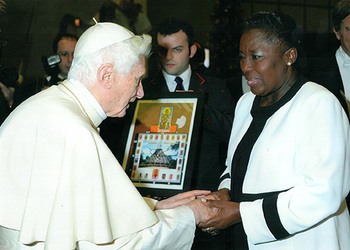 Dear Speaker, one’s love for you, Uganda’s newly re-elected Speaker of the 10th Parliament and you who was the old Speaker of the 9th Parliament, suddenly has catapulted upwards. Dear Speaker Rebecca Alitwala Kadaga one thanks you mum for being true to your roots. Thank you, thank you, and thank you. The reservation one had of you clinging to that ring-fenced affirmative action seat – Woman Member of Parliament (MP) for Kamuli – is all gone now. You are now one’s best MP ever, Uganda’s best Speaker ever, and the best national leader, ever.

Our Speaker, please do not go on the defensive, but instead, either conscientise or simply ignore those culturally dislocated Ugandans – such as those journalists – who have published stories that are derogatory of the culture, spirituality and religion of one of Uganda’s significant first nations – the Basoga of Uganda; and by extension the culture, spirituality and religion of other Ugandan first nations, over 50 of them as recognized in Uganda’s Constitution, and of Africa in general. The Basoga are currently the third largest first nation of Uganda, accounting for 8.8 percent of Uganda’s population – nearly three million people.

The Basoga were among the first nations that occupied the territory now known as Uganda prior to it being colonized. How in the world, does one even begin to imagine that prior to being colonized the Basoga had no culture, spirituality and religion of their own? Pardon me, actually some, including culturally dislocated Ugandans, have actually embraced and internalized the disgusting and offensive colonizers narrative that reduces the culture, spirituality and religion of those that they colonized to illogical fetishes and their places of worship to places were evil spirits and witchcraft prevails. To the extent that when the word shrine is used in relation to the colonized people’s places of worship it is perceived in the negative sense.

Moreover a shrine simply means a holy place, or place of pilgrimage, place of worship, temple, memorial, etc.; like a Christian Church or an Islamic Mosque, for example. One celebrates you Madam Speaker, for you continue to practice the culture, spirituality and religion of your ancestors and of your people, the Basoga. In that way, Madam Speaker, you are among those who have restored and are preserving the culture, spirituality and religion of a Ugandan culture for future generations. You are among those heroines who are fighting hard to ensure that the complete ethnocide of your people, the Basoga, does not occur.

You are fighting back against the intolerance of global-western and global-eastern religions and clearly in practice, you are advocating multiculturalism. Yes, those foreign religions, of the colonizers, that are intolerant of the culture, spirituality and religions of other peoples must be challenged to become more accommodative of our cultures, in the same way as we respective and accommodate their beliefs. The colonialists have since physically left Uganda, but clearly, sadly, the minds of a significant number of Ugandans are still colonized.

Yes, as you are quoted by the Daily Monitor, you clarified well: “Those are my roots, I had gone to inform my grandparents that I went through in Parliament; I went through as the Speaker. That is all I had gone to inform them about.” Madam Speaker, there is absolutely nothing wrong with you visiting with your ancestors on Nhyenda Hill, Nakigo Sub-County in Iganga District. As your clan leaders are quoted as having clarified, you did not go to the hill to perform any acts of sorcery, but was only fulfilling a cultural norm.  What is wrong with that?

“Each religion is highly ritualistic. Through years of practice, the religion develops a certain pattern and procedure that in later years becomes inseparable from the central message of that religion.” Madam Speaker, these are words of wisdom that are bequeathed to us by Steve Biko, a great freedom fighter whose advocacy for black consciousness cost him his life – he was bludgeoned to death by those of the global-west whose culture, spirituality and religion is elevated as the only truth.

Many Ugandans are now regularly in churches on Sundays, those churches where the tithing is an arm and a leg, sorry I digress, in those churches on Sunday taking wine-looking Quencher and tiny Britannia http://britannia.co.in/ biscuits as Holy Communion – you know the blood and body of Christ, belief. What makes that Christian ritual anymore legitimate than the rituals you performed at the house of worship of your ancestors? Madam Speaker, both sets of rituals achieve the same objective, as is the case with all religious rituals, they nurture man’s spiritual well-being and provide man with a moral conscience.

Madam Speaker, stay true to your roots and one wishes you the very best during the 10th Parliament.

1 thought on “Letter to the Speaker Rebecca A. Kadaga”

An invitation to engage