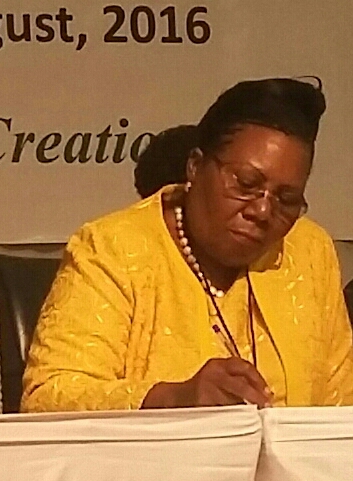 We must have commercial production. We must take deliberate action not only in the interventions, but also in the attitudes. You find people who have received seeds from Operation Wealth Creation (OWC) and you ask them what are you doing? They tell you we are just passing time in agriculture.

So we need to address the issue of attitude of our people if they are going to go into serious agriculture.

As a ministry we have to deliver a complete package. For example now, under OWC, they give out those seeds without fertilisers.

These remarks were made by Hon. Syda Bbumba on 29th August 2016 during the Uganda Joint Agricultural Sector Annual Review (JASAR) that was held at Speke Resort Munyonyo in Kampala in Uganda.

One of the events at the JASAR was a press conference among which the panellists were the Minister of Ministry of Agriculture Animal Industries and Fisheries (MAAIF) – Hon. Vincent Bamulangaki Sempijja, Hon. Bbumba, Other senior government officials – including heads of directorates within MAAIF, and Mr. Charles Owach of Food and Agriculture Organisation of the United Nations (FAO Uganda) who represented Government of Uganda (GOU) ‘Development Partners’.

Hon. Bbumba’s remarks were in response to the following three questions which journalists asked the panellists: