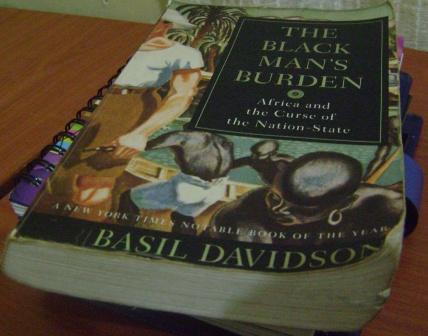 One is currently reading the book: “The Black Man’s Burden – Africa and the curse of the Nation-State”, by Basil Davidson. For that reason, one finds the blog post “the racism behind Kampala”  not so profound. The blog post essentially remains confined within the narrow framework and mentality of those that Davidson categorized as the re-captives.

Re-captives were African slaves who were saved and set free before they made the journey to the United States of America. The re-captives though resettled on the African content, often ended up in geographies and among peoples that were not of their original ancestry. Hence they were dislocated from their own cultures and at the same time in contact with people of global-western cultures – their ‘saviors’.

The re-captives, according to Davidson, believed their own African peoples had let them down – sold them as slaves; while peoples of the global-west had saved them. So, the re-captives in establishing their new homes or nations or culture in Africa wanted to be like those of the global-west and not re-discover their own original African culture which they designated inferior.

Reading the blog post “the racism behind Kampala” one gets the sense that it does not necessarily take us to pre-colonial Africa. For this reason, it  ends up in the trap of promoting an Africa on the basis of European models; the very ill that the author laments against. Davidson writes:

To become civilized Africans they must cease to be Africans, but in order to ensure that this should duly and completely happen, they should never be allowed to become Europeans.

So, the design of Kampala is consistent with the colonial mentality of racism. This is not profound, it is a fact well known. The blog post would have been profound for me if it had delved into a comparative analysis of how a non-racist Kampala may have emerged at ‘independence’ and as derived from models of organisation of the first nations of Uganda.

How might Kampala have been, for example, if it had been designed on the basis of how the pre-colonial Buganda Kingdom was organised? Would it have been different? Wouldn’t there be areas designated according to social classes? If the answer to this question is yes, then we need to think beyond racism.

Is the current division of Kampala racist or more on the basis of economic classes and one’s depth into ‘re-captives mentality’?

As in those culturally dislocated from the the culture of their own Ugandan first nation, but are not fully accepted and assimilated to the European culture will tend to gravitate to a particular geography in Kampala?

As in the current city planners fall within those deeply afflicted by ‘re-captives mentality’ and this is clear on how they allocate resources.

3 thoughts on “Structural Racism in Kampala?”