Uganda is importing significant quantities of wheat, hence the factoids in branding ‘Rolex’ (egg omelette wrapped in chapati) as a Ugandan food. Parke (2016), for example, in a story titled: “Delicious African foods you should try” and that was published by CNN, claimed ‘Rolex’ as an “African food” that is prepared by “Ugandan men all over Uganda” and that it can be “found on almost every street” in Uganda.

The Iteso people, my people, for example, refer to such a man with variations of the word ebwacit, which, according to the Ateso English Dictionary (Ongodia and Ejiet 2008), means either a transvestite or a man dressing and behaving like a woman. The connotation is that, according to the culture-normal criteria of the Iteso, cooking food should normally be a role for women.

Those few men cooking ‘Rolex’ on the street are the abnormal. The ‘Rolex’ cooks, within the central logic of the culture-normal criteria of ‘African-Ugandan’ cultures, are those men who are either culturally dislocated, they are confused or without pride, going onto the streets to cook; or they are those who are forced to become ‘Rolex’ cooks as a negative consequence of “modernisation”.

Cooking ‘Rolex’, certainly, is not among those livelihood options that the majority of men go into easily. In Teso, my first nation, derogatory remarks made of men who cook ‘Rolex’ or roast cassava or roast maize in farmers’ markets and on ‘the streets’ are often pre-fixed by such sentiments as:

So he has resorted to “awowa echapati o’town (fry chapati in town)” or “aipe emwongo o’gudo (roast cassava on the road).”

Whereas many perceive ‘Rolex’ cooks as ebwacit or as a product of an abnormality, ‘Westernised-Recaptives’ have ensured that ‘Rolex’ has a state-sanctioned carnival to promote it as a Ugandan food. Media reports celebrating ‘Rolex’, surely, can only be explained within the logic of ‘the-piper-was-called-to-play-and-dance-to-the-tune’, within the ethos of the proverb “he who pays the piper calls the tune” (Cambridge Dictionary 2016).

He who is perceived as ebwacit by a significant section of the population, had to be presented as a successful entrepreneur; but who, in reality, is simply an enabler of the global-west’s wheat value chain. So, in his article titled: “Rolex is Uganda’s new tourism product”, Kwesiga (2016) sang:

Draped in a cloth bearing Uganda flag colours, the state minister for tourism, wildlife and antiquities, Godfrey Kiwanda, announced yesterday that a carnival will take place on Sunday to promote ‘Rolex’ as Uganda’s new tourism product.

Before the minister arrived at Uganda media centre in Kampala to make the announcement, an oven containing ‘Rolex’ was placed on a table in the press conference room. A Makerere University based Kansel Enterprises Company, was hired to provide ‘Rolex’.

Kiwanda delivered his statement swiftly, saying he could not wait to start eating ‘his Rolex’.

It is ironic, that the survival of ‘Rolex’ cooks, likely depends on Bidco cooking oil.  Bidco, which impoverished many, continues to make a killing (pun intended) from the profits it makes selling cooking oil. The logic of pushing people off their land; forcing them into urban centres; and making their livelihoods dependent on the products of those who pushed them off their land in the first place is irrational.

‘Westernised-Recaptives’ –  including government ministers, members of parliament and the media – are keen to promote the consumption of food items, such as wheat, that are produced by farmers of the global-west. The consumption of ‘Rolex’ benefits the exogenous wheat producers – the farmers of the global west; and the exogenous transnational corporations that deal in the trade of food produce.

One does not have to be an economist to predict how easy it would be for the businesses of ‘Rolex’ cooks to go bust due to changes in wheat prices in places far away such as the United States of America and in whose economy the NRMO Administration, let alone the ‘Rolex’ cooks have absolutely zero influence.

The ‘Rolex’ saga highlights the myth of development which quantifies development only in money terms – how much money or how much cash profit one has made. As long as you are making money, the indignities that you go through to make that money are irrelevant. 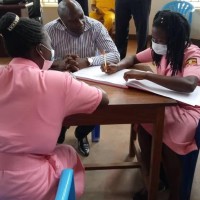