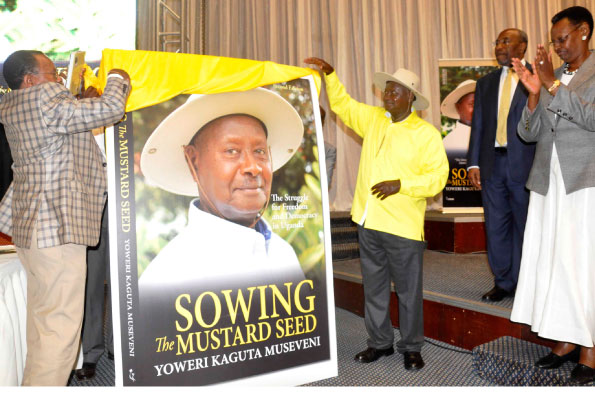 It is reported that His Excellency President Museveni has donated copies of his book: “Sowing the Mustard Seed” so that it is available at  Uganda Government aided schools for students to read and to be enlightened about Uganda’s national history so that they may become responsible citizens.

Logic follows that longevity in the office of the President makes the long ‘serving’ occupier of that office a ‘known entity’. President Museveni has occupied the Presidency of the Republic of Uganda for 31 years, during which time he has shared his views on the record. He is a ‘known entity’ for he has written down his thoughts in books, pamphlets, among other forms of documentation.

The award winning human rights lawyer, Mr. Nicholas Opiyo, discussing the Al Jazeera interview during “The Friday Panel on Spectrum”, a political talk show on Radio One FM90, for example, surmised that the Al Jazeera journalist who interviewed President Museveni was “out of depth”.

In discussing constitutionalism, democracy and free speech as they relate to Uganda, one of the biggest failures in Uganda’s governance during the term of office of President Museveni is the denying of Ugandans at the grassroots their constitutional right to regularly choose their own community leaders and to hold such community leaders accountable.

President Museveni is credited with developing the decentralized Local Council (LC) governance system which ‘devolved’ political power from the centre all the way to the village level – a thorough disruption of the status quo at the time.

All adult people of a village, that is the electors, form the village council from whom they elect their committee of nine to run the local affairs of the village on a day-to-day basis, describes President Museveni in his book “Sowing the Mustard Seed.”

Since 1993, we have added new roles to the range of responsibilities of local councils.  They vet recruits into the army and police, they have judicial powers to decide some of the civil cases, and they have been made responsible for a broad range of development in their areas, such as building clinics, dispensaries and schools, writes President Museveni.

As a matter of fact, Ugandans cannot not obtain passports nor National identity Cards, without being verified and approved by Village local councils (LCIs). LCIs and parish local councils (LCIIs) have such far reaching roles and the people currently carrying out these roles are doing so illegitimately. This is a front line issue on which to hold President Museveni accountable at every single opportunity.

The non-holding of lower local council elections is especially relevant when President Museveni pats himself on the back for building Uganda’s democracy. The term of office of those currently holding positions in LCI and LCII committees across the country expired in 2006, but they continue to serve. It is a constitutional requirement to have LC elections every five years. That they have not been conducted in 16 years is a gross violation of the Constitution of Uganda.

The pretext of not holding lower local council elections on account of no money to hold them using the secrete ballot is misleading.

In the beginning we did not use secret ballot for these local RC elections, we just asked people to line up behind the candidates of their choice. People were very happy with this for the simple reason that it eliminated cheating – which goes to show how much the practice of elections had been perverted in the past, writes President Museveni.

Apparently, wives will be beaten and tenants will be thrown out if they do not line up behind the right candidate. But seriously, are we to believe that the results of a secret ballot will not reveal the voting pattern? Then again, apart from the Central Region of Uganda where there is mailo land tenure – omutaka (landlord)-kibanja (tenant) holder relations – how many rural Ugandans actually live in rented houses or on rented land?

From a scholarly point of view the President’s donation of his book: “Sowing the Mustard Seed” is timely. In fact the President should go even further to donate to schools his other publications, particularly so the one titled: “What is Africa’s Problem?”  Let us embrace and welcome such wisdom that President Museveni bequeaths us.

Let us form book clubs in schools and encourage pupils and students to read important books such as those authored by President Museveni and others that are authored by and on other presidents of Uganda before him. Let us encourage our future leaders to read the critiques of such important publications, to fact check and debate both the publications and their accompanying critiques.

Let us encourage our future leaders to write book reports and opinion pieces that give comparative analysis of the written word and the reality. Active citizens who responsibly engage in debate on matters that affect their country is what defines a healthy democracy.