“The ideal clan elders were men of understanding and impartial judgement who saw themselves not as rulers but as the arbiters and mediators of their people … if a son lacked the quality of leadership, another among the sons, fulfilling the requirements of leadership, was chosen by the clan to take over. Courage and generosity, coupled with a sharp sense of good and impartial judgement were the ideal qualities of a leader.”

Okalany D. H. in ‘Mukongoro during the Asonya’ quoted by Dr. Ben Jones in “Beyond the State in Rural Uganda.”

Unlike some other cultures in which one can become a ‘big man’ simply because of his parentage, for example, within the central logic of Iteso culture, men must earn the position and the respect of the title ‘big man’.

Obviously, those who are borne to wealthy families, their fathers are ‘big men’, do have a head start. But within the central logic of Iteso culture, it is not enough for you to claim you are a ‘big man’ just because you are a descendant of a ‘big man’.

Doing observations in Oledai Sub-Parish in Ngora in Teso, as part of an empirical study, Dr. Ben Jones, for example, noted that in order to become a ‘big man’ in Oledai, at the time in the 2000s, one had to do so through his own initiative and entrepreneurship.

It is what you proactively do successfully, your entrepreneurship, that earns you respect. In other words, to earn and to command respect, within the central logic of Iteso culture, you have to be seen initiating something and doing it yourself. 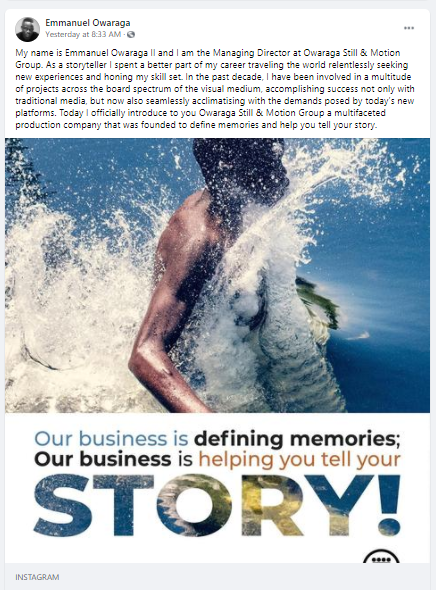 So, for example, whereas, Emmanuel Owaraga II is named after his father, the late Ejakait Engineer George William Obityo Owaraga, who was a chief of the Ikaribwok Isekelio Clan of the Iteso, Owaraga II cannot simply claim ‘big man’ status because he is named after a chief and is a descendant of the chief.

Owaraga II must prove himself in his own right. He must excel in his own field and in his own enterprise. He must make a name for himself as he carries forward and upward the powerful legacy of his name. Owaraga II, indeed, is seemingly doing so through his craft, being the best visual story teller.

I conclude where I started. Just because you are an enterprising material wealth creator is not enough to make you among respected ‘big men’ among my people, the Iteso. You must have the additional qualities of being ‘a man of the people’. You must be seen and heard participating in activities and in discourse that matter to your fellows.

Dr. Ben Jones’ observations in Oledai, according to him, revealed how egalitarian and competitive the processes of becoming a ‘big man’ in Oledai was in the 2000s. It was how one participated, negotiated and demonstrated political authority that earned one ‘big man’ status.

Will Owaraga II comfortably fill the shoes of his namesake and add significant additional value to the legacy of being ‘a man of the people’? The jury is still out.